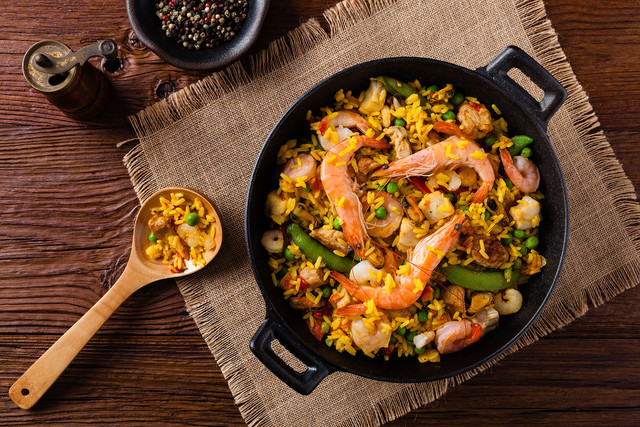 There are dishes that, undoubtedly, are associated with a country, such as Spain's "Paella".

Paella can be eaten in any city in Spain, but its origin is in the Valencia area, with documents that place it between the sec. XV or XVI. It was the food base for rural workers. They used rice, olive oil and salt as main ingredients, all made in a round pan with wings, wide and shallow, called "paella". These ingredients combined what they harvested from the field, game meat (hare and duck), seasonal vegetables and saffron (which gives the preparation its yellow color).

With the arrival of "paella" to the coast, other ingredients started to be added, such as seafood, shrimp, squid, mussels, and crayfish. "Paella" is considered a festive dish, so there is no shortage of weddings, birthdays, christenings, holidays and weekends. However, the real "paella" does not include seafood or seafood.

Also known as "rice à Valencian", the origin of its name comes from the Latin "palella" (small dish or pot). They say that the most tasty "paella" should preferably be cooked outdoors over a wood fire.

Nowadays, you can find several types of "Paella":

Did your mouth water and want to eat a Paella? We leave you a recipe here (in https://www.spain.info/pt_BR/que-quieres/gastronomia/recetas/paella.html)

Place the paella on the fire with the oil and, when it is very hot, add the chicken and rabbit that were previously chopped. Fry the meat until lightly browned. The tomato is peeled, peeled and crushed and then fried over low heat, together with the pieces of pepper for 7 or 8 minutes. When the suffering is almost ready, add a pinch of salt, the meat and the paprika and sauté everything again without burning. Add water to cover the sauce and cook. The time depends on the consistency of the meat. If the bird or rabbit is outdoors, it is calculated 30 or 35 minutes. Ten minutes before the time we calculated for cooking the meat, we added the beans and the carob; in this way, they remain at their point. We can also add snails, previously eliminated. At the end of the cooking time, more hot water is added and the boiling is allowed to continue for another 3 or 4 minutes. Add the saffron threads and the rosemary sprig, rectify with salt and continue boiling for another 5 minutes. Then, the rice is added evenly and it is allowed to cook for another 5 or 6 minutes over high heat, which gradually decreases. Once cooking is finished, it is left to rest for a few minutes for the rice to finish absorbing the broth. Another variety is mixed paella, which can be served with ingredients such as mussels, shrimp, prawns, crayfish or squid.

It is served in the paella itself and it is convenient to rest for 5 or 6 minutes.